Very few visitors give thought to the site to which they are hoping to visit and in most cases there are simple choices to be considered: Is the site value for money? Is there a nice beach and has it special attractions worth seeing? However, the background to the very presence of these desirable features receives little consideration and should be both understood and appreciated.

Thong Beach Lodge sits in the very heart of 55 years of intense effort by conservationists and the benefits of all that effort is available for the sheer joy and enjoyment of every visitor.

Take the beaches for example. The golden silica sand beaches of Maputaland, which stretch for 100 kilometres both north and south of the Lodge, are absolutely pristine and guests are faced with almost a wilderness experience with no other beach development within dozens of kilometres. To ensure that this idyllic situation would be possible the conservation bodies of the region, starting with the Natal Parks Board in 1963, began to press to have the area proclaimed a protected area. The government of the day was not too enthusiastic so it took 23 years before the state proclaimed the first stretch of coast as the St Lucia Marine Reserve. Another three years was required to badger the state to extend the protected area further north to the Mozambique border. With approach of the new democratic South Africa the Natal Parks Board prepared and submitted a proposal that that entire region be considered as a World Heritage Site (Natural) and in 1998 Board staff entertained the team from the World Heritage Convention who members of which gave it their blessing. Shortly afterwards the Isimangaliso Wetland Park was established to ensure that the pristine values of this area would be permanently protected.

It should be considered too that the beaches are not simply a pretty site. They are home to an enormous range of biodiversity from the high forested dunes that form the beautiful backdrop to the beach to the wide and spectacular silica sand beaches that host an astonishing range of animals including millions of ghost and mole crabs that skitter before the feet of the adventurous visitor. 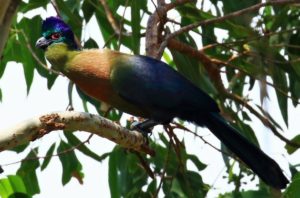 Amongst the most spectacular of the beach species are the sea turtles and these are the core reason why the Maputaland beaches were the subject of such intense conservation effort over so many years. And for good reason. Some 60 years ago it became apparent that, all over the world, sea turtle beaches were being stripped of their annual nesting visitors through commercial greed and the growth of human populations. This part of the South African coast was no exception and despite the first laws to protect turtles having been passed in 1916 the killing of nesting sea turtles went on unabated until 1963 when conservation staff were sent to protect and study the remnants of what was thought to be a much larger population.

Research over the past 55 years has shown that the leatherback and loggerhead turtles that nest here are not just local but come from tens of thousands of kilometres away to lay their hundreds of eggs on the beaches. During the turtles’ annual visits guests may walk the beaches to encounter a nesting process that has continued unchanged in pattern for millions of years. The Lodge supports the conservation of these amazing reptiles and during the season runs vehicle tours with expert guides to grow the awareness of the need for rational conservation effort.

It has all been worthwhile because nesting loggerhead females now number over a thousand per season as compared to less than 200 in 1963. Leatherbacks have not responded as quickly but nesting numbers are now showing a positive trend and everyone involved is hoping for a more rapid growth in nesting numbers. In fact, on many other beaches in the Western Indian Ocean, turtle conservation efforts have shown wonderful responses ensuring the long term survival of these species. A surprise find a few years ago, first noticed by a Lodge staff member on a turtle tour with visitors, was the first record of a nesting Green Turtle. The Green Turtle is very common offshore and often seen by the diving groups but the nearest large nesting ground is on Europa Island some 750 km north in the middle of the Mozambique Channel. So thanks to the long conservation efforts visitors can now expect to see up to three nesting species on these beaches. 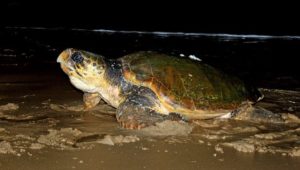 The Loggerhead Turtle coming ashore to lay her 100+ eggs. She does this four times per season. 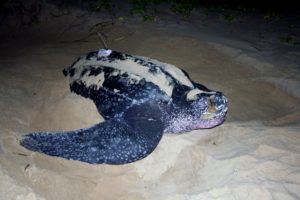 The Leatherback Turtle (below, with satellite transponder) nests up to ten times per season! 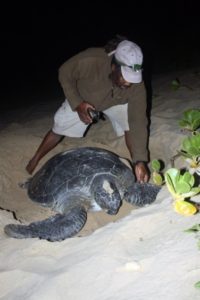 Another special feature near the Lodge is Lake Sibaya, the largest freshwater lake in South Africa. Not only is it home to crocodiles and hippopotamus but the birds, both on the lake and its grassland surrounds, make a visit a memorable experience. Here one can see three species of Longclaws including the very rare Rosy Throated Longclaw, and quaint water birds such as Water Thick-knees and Wattled Lapwings. 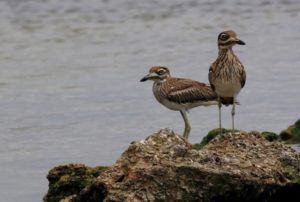 A visit to Thonga Beach Lodge is to share in an experience of a magnificent area created by conservation effort and managed by dedicated staff with conservation ethics. Come and enjoy.

Book directly with Thonga Beach Lodge and ask about our winter specials.