By Dr Sharon Grussendorff, regular guest at the Isibindi Africa Lodges, with images from the talented Carl Moller of Thonga Beach Lodge.

Many of us have happy memories of playing on the beach as a child with our bucket and spade, splashing about in the sea and running freely in the sand. Although I have grown out of many of these activities, one of the things that I have never grown too old for is the wonder of gazing into the magical and mysterious world of rock pools. Like a private trip to a mini-aquarium, one is treated to a world of bright colours, exotic-shaped creatures and darting fish, with the added beauty of rippled reflections of the blue sky. 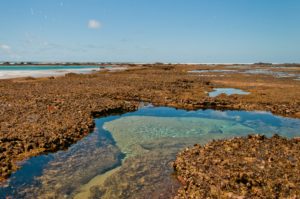 One of the weird and wonderful life forms that are easy to spot in rock pools are sea anemones, with their gently waving tentacles. These are very primitive animals that are related to jellyfish. They stick to rocks by a slimy disc, and although they can move around a little bit, they mainly stay in one place. Their waving tentacles catch small fish or other living creatures and wrap around them. The anemone then stings its prey, which paralyses it before it is eaten. You can see a wide range of anemones in South African rock pools. For example, the false plum anemone is a large anemone (up to 20 cm in diameter) with a red colour in the middle and cream coloured tentacles that have a mauve tip. The The long-tentacled anemone, or crevice anemone, has 96 long tentacles with small round bulges at their base. These anemones are often found half-covered in sand. 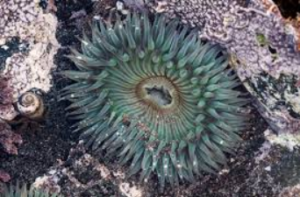 If you look carefully into a rock pool you might notice a creature that is easy to miss – a dwarf cushion star. These are a type of “star fish” (more correctly known as sea stars), but they do not have very clear “arms” – they have more of a five-sided shape. They can have various colours, and can be well camouflaged, which is why it takes a while to spot them. 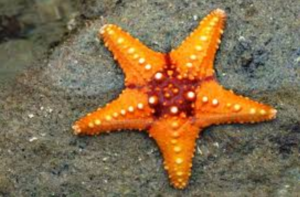 You might also be able to spot sea urchins, with their long spiky spines. They often cover themselves with shells and other small bits of matter to protect themselves from the sun. Be careful to not stand on these, as the spines are very sharp!

You will also see a range of happy campers crawling around inside rock pools – these are small animals that carry their homes on their backs, and are known as crustaceans, or shell fish. The ones you are most likely to see are hermit crab and shore crab.

The shore crab does not dry out very easily, so it can live quite high up the sea shore, under stones or in cracks, as well as in rock pools. The adults are green, but the young can be red or yellow with white patches. The crabs feed on small animals.

The hermit crab likes to find an empty sea-snail shell and moves in. This is because it does not have its own covering, but has a soft, unprotected belly which needs to be hidden away in a shell for protection. As the crab grows, it has to shed its outer skin-like layer, so it pops out of its adopted shell, sheds its skin, then returns to the shell. The hermit crab often gets back to its adopted shell only to find that it is too small, and it has to go out looking for a larger one. During this time the crab is very vulnerable to attack. 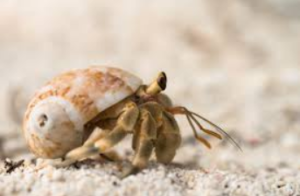 You will of course see many small fish darting around in rock pools. They tend to be very shy, so you will need to sit quietly for a while until they poke their heads out.

There are many other interesting living things to see in rock pools, such as seaweeds, corals, worms, sponges, barnacles (sticky little shell fish with hard shells), mussels, turban snails (with a coiled shell), limpets (with an oval shell) and if you are very lucky you might spot an octopus! 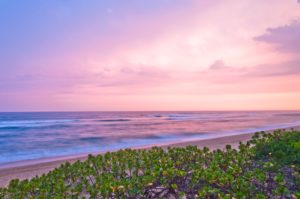