A dream that I have had for a long time is to swim in the ocean with dolphins. Somehow it is a dream that I have had since my childhood, since dolphins feel to me like creatures that belong with more mythical beings such as angels and unicorns. In my imagination dolphins have the power to bestow deep well-being and the blessing of peaceful contentment on any who are fortunate enough to come close to them. 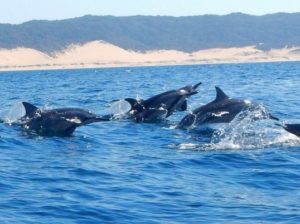 Dolphins are very intelligent sea mammals. They are related to toothed whales, and some of their distant cousins include pilot whales and orcas. They live mostly in shallow seas near to land, which is why they can be spotted so often surfing along South Africa’s shorelines.

Dolphins feed off small sea creatures such as fish, squid and crabs. To find their way around and to locate their prey they use high-pitched sounds and clicks, similar to the way bats use sounds to sense their surroundings.  This sound bounces off objects, and by listening to the echo dolphins can work out how far the object is from them. They also use sounds to communicate with one another, and are able to copy the sound that another dolphin makes to catch its attention. They have very good hearing, both in water and in the air, so that even if they are blind they can find their way around just using their hearing.

Dolphins are very playful and agile, often seen leaping out of the water or rising vertically out of the water to look around them (this is called spy-hopping). They are very sociable creatures, living in large groups, where they often synchronize their swimming and hunt together as a pack.

Although dolphins don’t have many natural enemies, many are killed as a result of human threats, such as from pesticides, heavy metals, plastics, being trapped in fishing nets, and in some countries they are hunted for food.

Dolphins have been seen to interact playfully with other animals, such as dogs and humpback whales, as well as with humans. They are so intelligent that they are described as being able to teach, learn, cooperate, scheme, and even grieve. They are very gentle and friendly creatures, and there are even some stories told about how dolphins have come to the rescue of people and other animals who are in danger.

Maybe one day I will be lucky enough to realise this dream that I have of swimming with dolphins, but until that day I am happy to continue holding these mythic creatures in my heart and imagination, and to swim with them in my most contented daydreams. 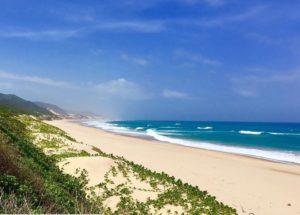 To have a chance to see dolphin from this pristine part of the world, book your stay at Thonga Beach Lodge, Mabibi, Northern KwaZulu-Natal.