I shall wear the bottom of my trousers rolled.
Shall I part my hair behind? Do I dare to eat a peach?
I shall wear white flannel trousers, and walk upon the beach.
I have heard the mermaids singing each to each.
I do not think that they will sing for me.

…We have lingered in the chambers of the sea,

By sea-girls wreathed with seaweed red and brown
till human voices wake us, and we drown.

This poem by a great man not willing to give in to his age is a perfect example of a gentleman who decided to join us at Thonga Beach Lodge for his Ruby Anniversary.

Him and his wife decided to share their special time with us at Thonga Beach Lodge, and a choice that he made on in September 2015 gave me new hope and a different outlook on scuba diving instructing. As I have taught my courses I thought the older one gets there more set in your ways you become and your mind is not open to new adventures. How dreadfully wrong I have been.

The guest joined me in the pool where we ran though the Discover Scuba Diving course like clockwork, without a moment of hesitation from him. Into the pool we went and partial mask clearance turned to mask removal and an ‘all clear’. Regulator recovery was a breeze and not once was a breath skipped. In awe I watched as this man went well beyond my expectations.

The next day we ventured together into the ocean. With the waves breaking high we pushed the boat in with our skipper Jacques, undertaking the adventurous launch into the sea. The guest insisted on pushing the boat in with Nathi, Lucky, Jacques and I. Once past the back line, with nerves hitting high, our guest was excited to get into the water.

After a perfect backwards roll we gathered on the surface. Our descent into the underwater world commenced.

Drifting in the water we found many species that our guest had only seen in a book. 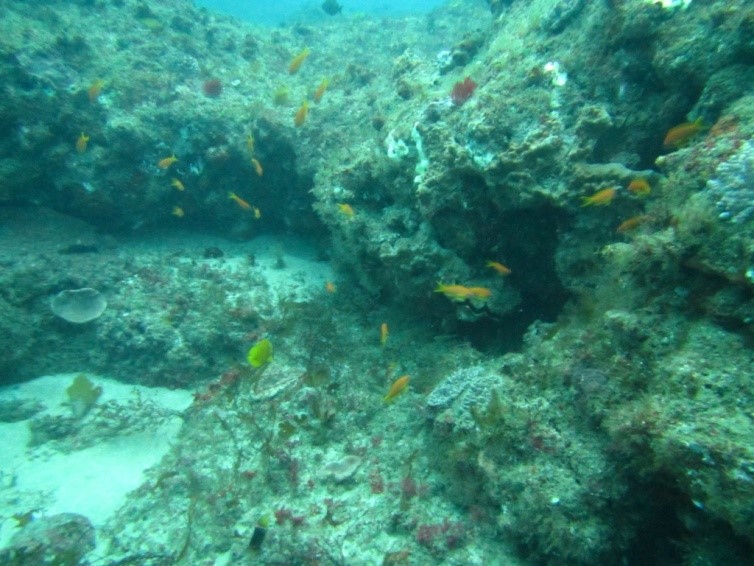 Sea Goldies live in and around coral reefs in warm tropical oceans. These beautiful little fish are usually in large shoals and add splashes of colour to the reef. We looked carefully at the differences between males and females. Females are orange-gold with a blue stripe below the eye and males are reddish with an extended third dorsal spine.

Many fishes have the ability to change sex. Some change from male to female, while others change from female to male, such as Sea Goldies. This is the dominant reproductive style on coral reefs. On these reefs there is intense competition for the best spawning sites and large dominant males set up territories which are defended against all other males. The larger the male, the bigger his territory and the more females he will attract to spawn with. In this way, millions of eggs can be fertilised by a single male. Smaller fish cannot compete for these sites so they remain female until they are large enough to compete as the opportunity arises. 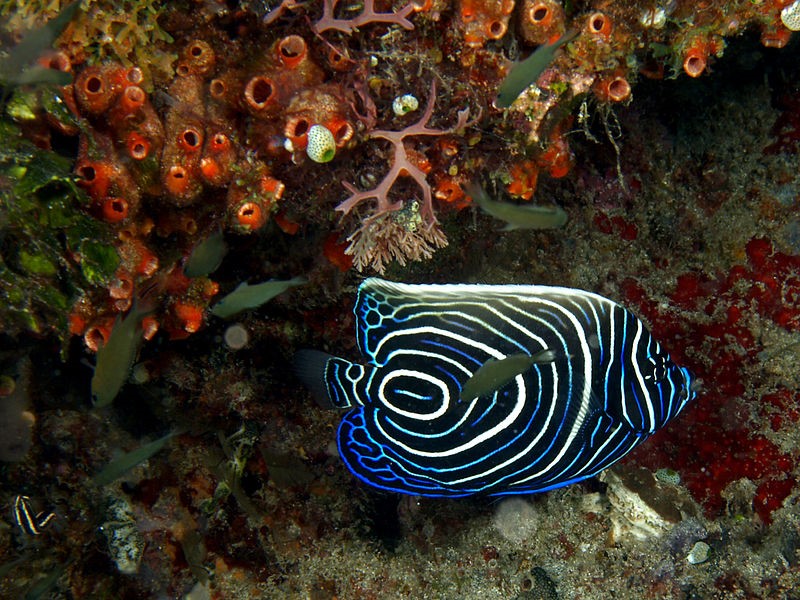 Juvenile Emperor Angelfish are dark blue with electric blue and white rings; adults have yellow and blue stripes, with black around the eyes. It takes about 24 to 30 months for an emperor angelfish to acquire its adult colouring. They grow to 40 cm (15.75 in) in length. Not only do they change colour with maturity, but during mating events as well. The mask of a male will turn a dark blue, almost black, while the female will turn a bland colour. At dusk, a pair of Emperor Angelfish will rush to the surface, away from the reef, to mate in area where eggs can be taken away on currents, and then they then scurry back down to the reef. This allows the eggs to float with the currents and be widely distributed.

Emperor Angelfish are omnivorous, feeding on both small invertebrates and plants. Sponges and algae are their primary diet. They have bulky, strong jaws that are able to chew up the sponges, which are made up of tiny, needle-like pieces of silica (this would be the equivalent of a human chewing on small shards of glass). The digestive tract of an emperor angelfish coats its food with a layer of mucus in order to further protect itself from the sharp silica.

Out dive was now complete, however Mother Nature granted us another wonder on our return.

We came across mother Humpback whales taking care of a baby because the baby wouldn’t survive without the help and protection of their mothers. When the whale is born, the first thing the mother has to do is bring the baby whale to the surface so that it can take its first breath of fresh air. Even though we did not see the birth of this calf we did see the calf’s first breath. After that the mother might support the calf until it is strong enough to swim on its own. Pretty soon the baby whale is strong enough to try breaching and slapping its pectoral fins on the water and once the calf is tired the mother will push the baby to the surface, nudge the calf further, as well as have the calf swim below her belly.

It was an inspirational day for a motivational man and for myself who has renewed inspiration for this work of introducing people of all ages to the wonders of the sea.